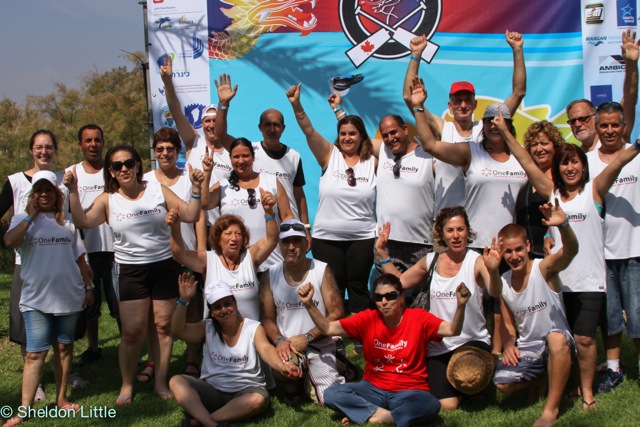 On Friday, May 10, close to 700 people gathered in Tiberias for the second annual Dragon Boat Israel Festival. Of these, 22 had travelled to Israel specifically to participate in the event as Team One Family Fund Canada. The joint Canada-Israel initiative has been very successful in both introducing the sport of dragon boat racing to Israel while also promoting tourism to the north. As well, the exciting, team-focused event supports several Israeli charities and fosters cultural awareness. Thanks to a stunning group effort, Team One Family took first place in its category, and finished eighth out of thirty-three teams overall. Most importantly, the event was a great financial success, raising over $62,000 for One Family Fund Canada – well in excess of last year’s total.

Unlike some of the teams, which had been practicing for months in preparation for the races, Team One Family members – who ranged in age from 14 year old Amit Kobi to Herb Loomer, an experienced dragon boater from Vancouver who celebrated his 80th birthday paddling alongside daughters Robyn Greenspan and Janice Margolese – had never paddled together until the actual race.

“The key to dragon boat racing is figuring out how to keep the 22 team members – all in one boat – in sync,” said Pam Albert, Executive Director, One Family Fund Canada. “Somehow we were incredibly lucky.” Perhaps the great determination of the group to lift up the spirits of the victims, and the booming voice of the coach, Brad Sippel, in the stern helped the group to rise to the occasion.

“It was really moving to see how the terror victims’ demeanours changed when racing – from heavy, unfocused, and unable to interact, to lightness and smiles,” said Albert, a second-year Dragon Boat team member. 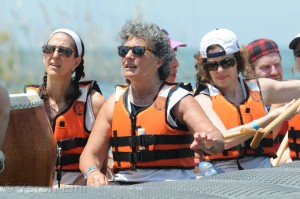 The six day Dragon Boat/One Family Israel Experience affords the unique, sometimes life-altering opportunity to see the OFF centres in Ra’anana and Jerusalem in action and to meet with many victims and their families. Many of the Canadian team members were parents of campers at Camp Timberlane, which, thanks to the generosity of Bernie Little, annually hosts Israeli teenagers affected by terror in an effort to help them heal via an enriching summer experience.

“All of the victims we met with are struggling with varying levels of post-traumatic stress disorder and the challenges of trying to put their lives back together. Meeting with these victims, talking to them, both during the races and in group therapy sessions, was, the most moving experience I ever had, even after many trips to Israel, said participant Shelley Little. “The bonds created by face to face connections,” said event chair Fran Grundman, “have a powerful and positive impact on the victims.”

One Family team member Dina Kit, a bereaved mother, lost her son in a tank explosion by a suicide bomber in 2001. She described Dragon Boat Israel Festival as a highlight of her year.

“It was just so much fun. We had to figure how to paddle together and we were continually helping each other, even the language barrier couldn’t get in our way. Having the Canadian group with us made us feel like we are being supported even by people outside of Israel.

“ While there were many stories that we heard, one very important and emotional one will stay with all us for a long time,” said Shelley Little. “An Israeli man stood up in the circle. Beside him was another man sitting down, and a woman beside him. Let’s call the man standing Isaac, and the man sitting Jacob. Isaac was trembling and crying and holding on to the arm of Jacob sitting beside him. He told his story with great emotion. Ten years prior to this meeting he had been in a bombing that left him in a coma for some time. Isaac, Jacob and his wife were invited to the retreat and races, but they did not know each other. Over lunch they realized that they both had been in the same bombing and that they both were in the same emergency department in a hospital. Isaac was in a coma but Jacob was not and they were side by side in beds. The women sitting beside Jacob was his wife. While in the hospital she was on her cell phone trying to have her husband moved to another hospital that was closer for her. She was successful and Jacob was transferred. The story should have ended there, but it was only the beginning. 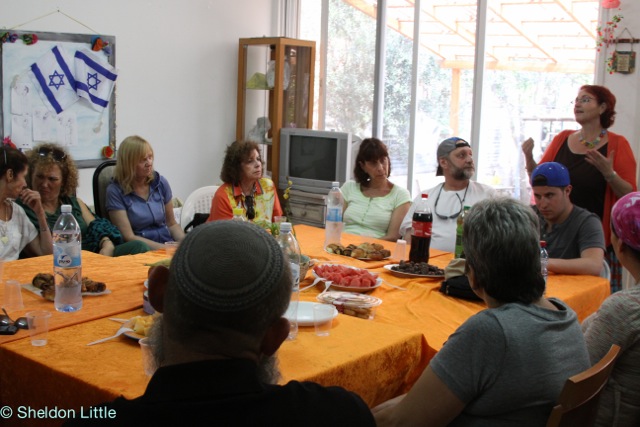 “Over lunch Isaac heard Jacob’s wife’s voice and said ‘I know who you are.’ Isaac was in a coma but he heard her voice and had kept that sound of her voice with him for ten years. Jacob and his wife did not believe Isaac until he said ‘I know what you said over the phone.’ He told them that he heard her asking to have her husband moved to another hospital. He was still in a coma. There was dead silence in the room in reaction to this story. Israel is full of stories about reconnection of survivors and victims, but this was beyond belief. It reaffirms the belief in the human spirit.”

Randi Skurka, who with Meryle Kates, represented Stand With Us, saw meaning in the fact that Dragon Boat takes place around Shavuot, on which the Book of Ruth is read. “Ruth wanted to follow her mother –in – law because she saw that she came from a special kind of society, one in which there was tolerance and justice. What is extraordinary about Israel today is the kind of society it has created,” said Skurka. Funds raised from Dragon Boat Israel are allocated to Warm Homes, a charity that helps at-risk adolescent girls and Kav Hazniuk, which cultivates leadership potential among young Israeli adults.

“Dragon Boat Israel affords participants a truly unique opportunity to connect with terror victims, while empowering the terror victims themselves. It deepened the connection between our communities and made us more aware of what is still needed,” said Albert. One Family is grateful to everyone who participated, and for your generous support. Together we gave hope, strength and sunshine to many victims, experienced Israel from a unique perspective and forged bonds with friends old and new. We hope to see you again next year!